Before & After: A Beautifully Brighter Ashburn Kitchen Remodel 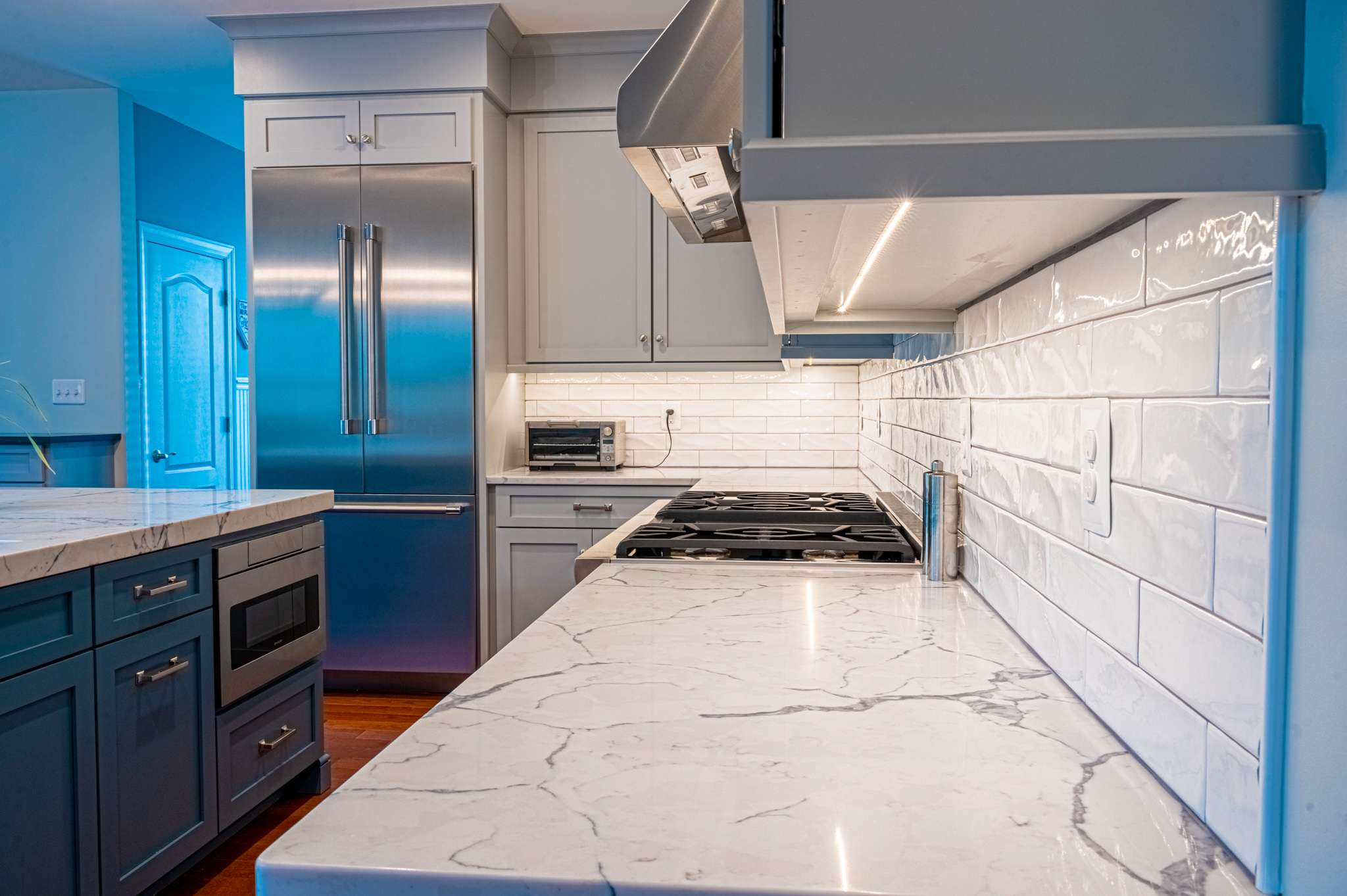 A kitchen remodel is a very personal decision for many homeowners. With so much time spent in the kitchen, it truly serves as the touch point for family gatherings, meal prep and eating, heart to heart talks, and midnight snacks. But what if your original kitchen, while very functional and lovely, just doesn’t say “you”? For Eric and Mellany, the time came to update their Ashburn kitchen from its original look and feel as their family grew. They realized that a better flow and updated design was necessary to reflect their personal design aesthetic – and working with the MOSS design team, their kitchen remodel was completed with care and vision.

Eric and Mellany knew that the layout of their original kitchen was not to their liking. With a small center island plus a peninsula coming from an adjacent wall, the room felt blocky and tight, even though it had plenty of square footage. In addition, the natural wood cabinets, combined with the hardwood flooring, gave the kitchen a darker monotone color scheme, and with the cabinets also not reaching the ceiling, the lack of storage was a concern. Finally, the lighting fixture above the island was considerably basic, and didn’t reflect the style they envisioned.

Again, the desk area was a fully functional area for checking email, making phone calls, and doing other household tasks, yet it needed to be updated to make it part of the kitchen design yet with its own unique look.

Inspired by the beautiful quartz stone that they found for the center island and the countertops, MOSS gave Eric and Mellany the kitchen of their dreams. The family always wanted a massive center island to serve as a gathering place for entertaining or a place to prepare and enjoy meals together. The larger island gave them the ability to do this as well as store more kitchen items.

The removal of the peninsula island gave them the space to move around more easily. It was replaced by a taller piece of cabinetry to create the look of a piece of furniture. It was also given a different quartz countertop from the rest of the kitchen to help reinforce the idea of it being a piece of “furniture”. This smaller corner unit serves as a “catch all” for the family as they enter the house through the mudroom.

The entire kitchen was fitted with semi-custom cabinetry. The perimeter cabinets were painted a soft gray and heightened to reach the ceiling. The center island’s cabinetry was painted a darker gray/blue to create a unique but classic look that gives the space a more distinctive multi-colored hue. Along with this, new professional grade appliances were installed – the favorite part for the homeowners is the built-in range griddle!

New beveled subway tile was installed throughout the kitchen and butler’s pantry. A bit of beveling can do a great deal to create beautiful movement on the walls. The butler’s pantry was updated to match the main kitchen space as well and continues to serve as a wonderful space to store beverages, make coffee, and display décor.

The kitchen’s desk area was updated as well but given a unique treatment to make it look like a home office space. The desktop was outfitted with hardwood so that it feels like a working area. And on the walls behind the home computer, shiplap tile was placed in a vertical pattern, drawing the eye to an incredibly unique portion of the space.

Eric and Mellany knew that updating their Ashburn kitchen was in their future, and the time came to give it a facelift. Without removing walls, our MOSS designers were able to reconfigure the flow of the kitchen, created new elements that give the family functional spaces, and brightened up the entire space with the cabinetry colors, lighting fixtures and more. 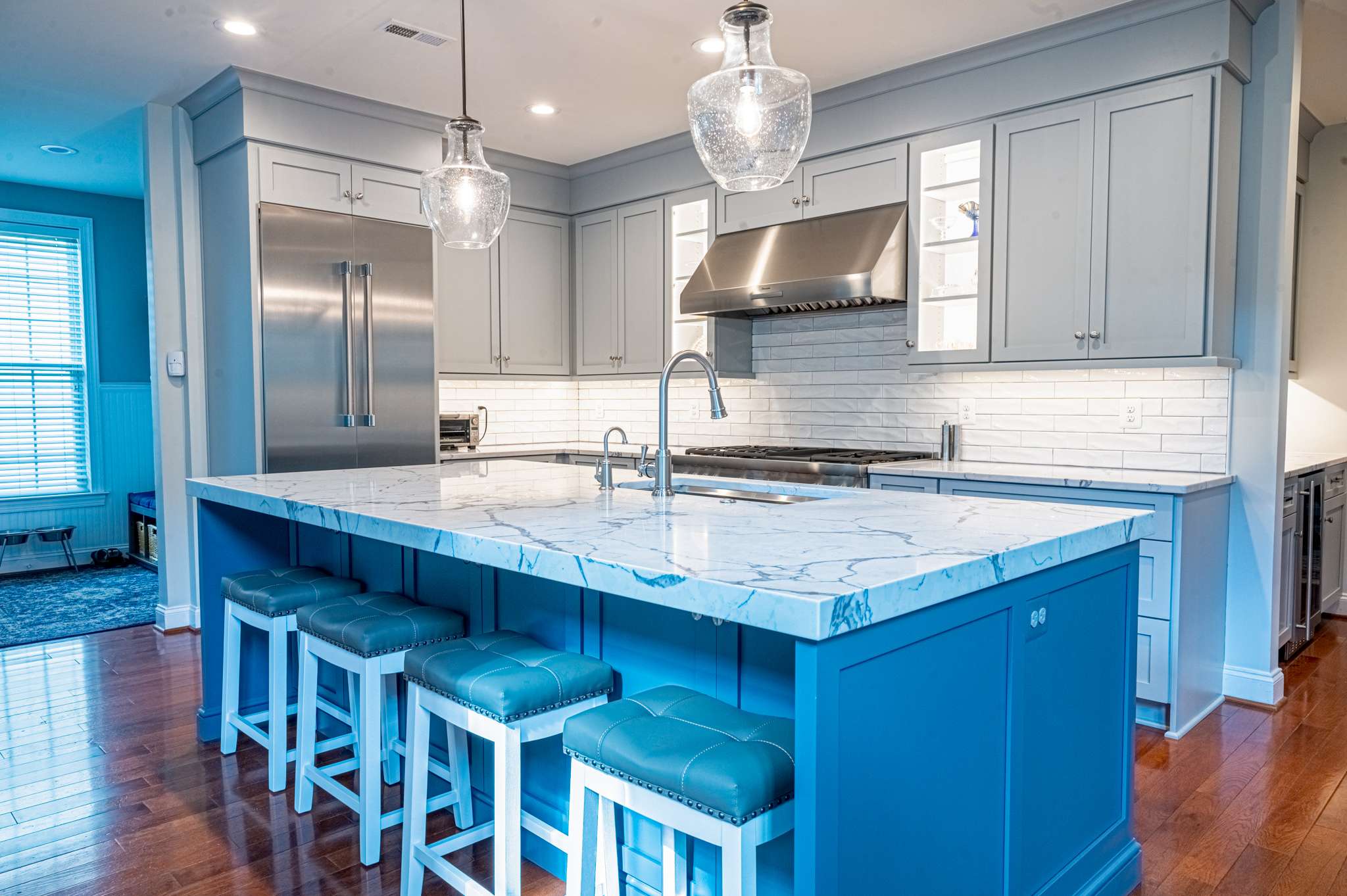 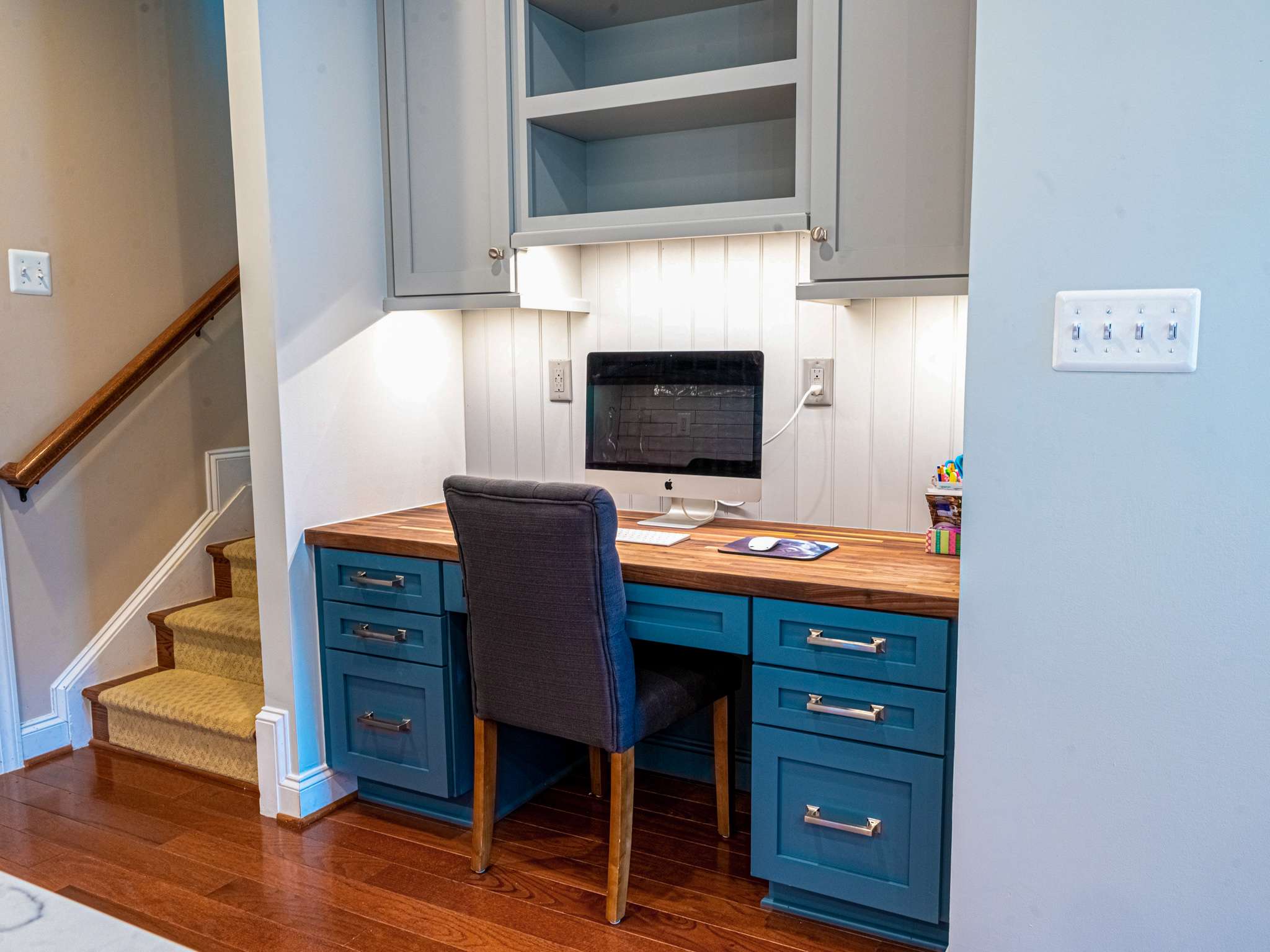 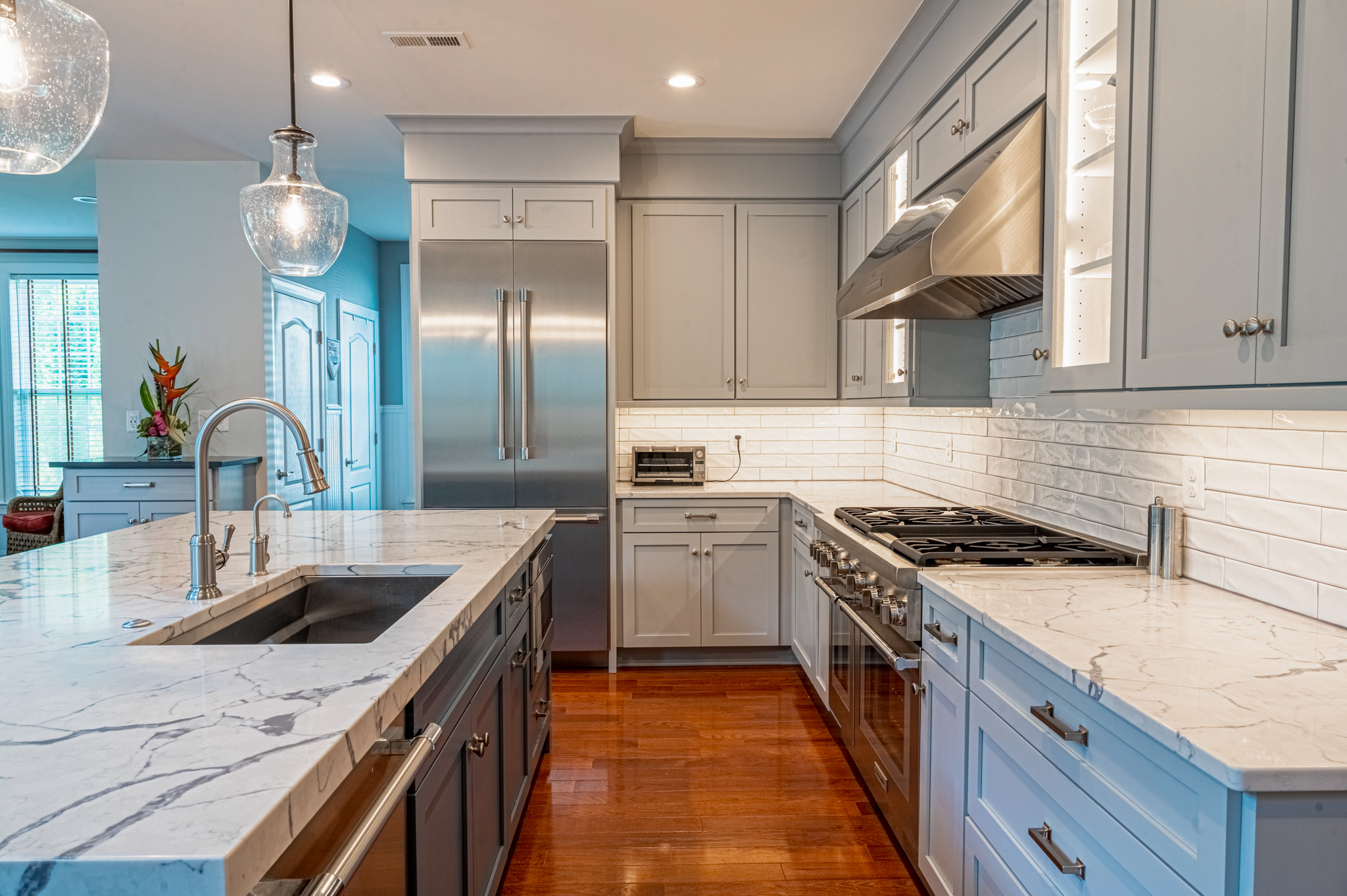 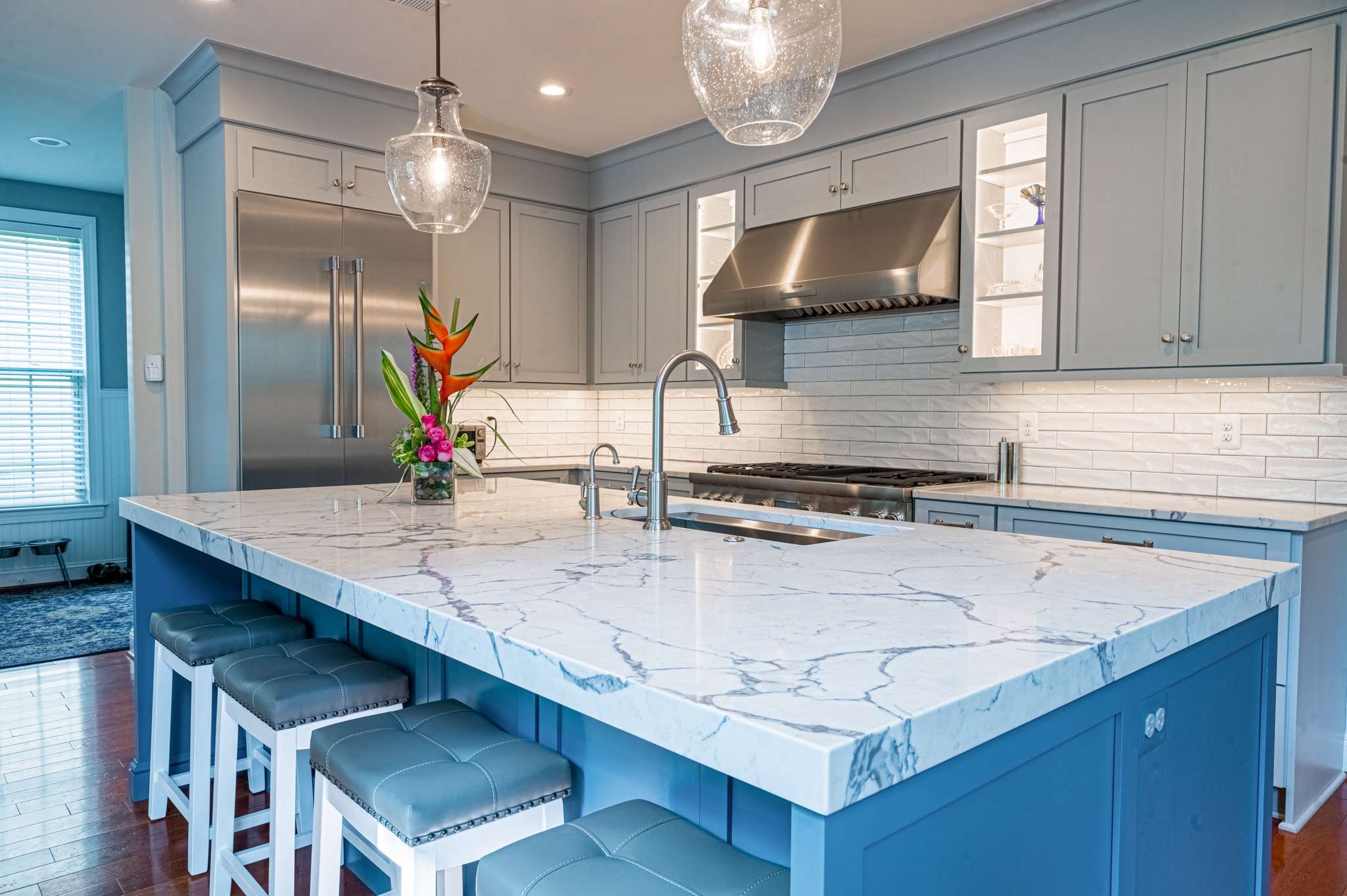